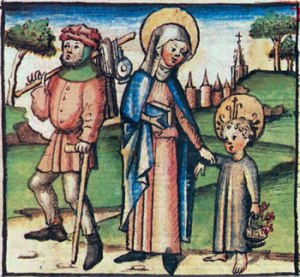 On Christmas Eve at the Midnight Mass we heard from St. Luke’s Gospel that when the shepherd’s heard the angel’s announcement they went to Bethlehem “with haste, and found Mary and Joseph, and the babe lying in a manger.”

These first witnesses, these first worshipers, beheld Jesus in the context of a family – a mother, a father, and their newborn Son.  That is why in the Church’s yearly pattern of devotion on this, the first Sunday after Christmas, we keep this great feast of the Holy Family of Jesus, Mary, and Joseph.  And of course in a week’s time we will keep the feast of the Epiphany when our Lord was manifested to the Gentiles in the mysterious persons of the Magi, who, again, discover “the King of the Jews” whose star they had seen in the East precisely in the context of a family.

The family – the normal, human family – is the context in which Jesus is known and must be understood.  And so on this day we are invited to contemplate this image, this icon, of the Holy Family in which the little little Lord Jesus “appears as the center of his parents’ affection and care”.

It’s in this context that we understand that Jesus shared our full humanity, that he really one of us, one with us – not only in the strictly biological sense (important as that is), but in the normal social, developmental, and experiential senses as well.  He grew and matured in the virtues of faith and love just as any child, any many man, ordinarily does – if he does – that is, from his parents.  From them Jesus came “to know the beauty of faith, of love for god and his law… the demands of justice, which are fulfilled in love.”

And it is in this context, the context of our own families, of course, that we come to know him.  We have in our Old Testament and Epistle readings today meditation on and instruction in family life.  Sirach speaks to us of the honor children ought to bear toward parents, especially in their old age.  St. Paul speaks of the gentleness, respect, and loving obedience that ought to obtain within the family.  But, as Pope Benedict once pointed out, the Gospels really contain no discourses, no significant instruction from our Lord, on family life.  However, our Pope Emeritus would go on to point out, they contain “an event which is worth far more than any words: God wanted to be born and grow up in a human family.  In this way he consecrated the family as the first and ordinary means of his encounter with humanity”.

“The first and ordinary means of his encounter with humanity.”  Children will see, or not see, something of God’s tender love in the way they are cared for by their parents.  They will learn the laws and precepts of the Church not so much by, or not so deeply by, explicit lessons as by the example of their parents’ faithful and joyful observance.  Again, is this not what we see in this morning’s Gospel lesson, the Candlemas story of our Lord’s Presentation in the Temple? Mary and Joseph carefully and joyfully fulfilling their obligations as faithful parents according, as St. Luke comments, to what is written in the law of the Lord.

Again, the Mosaic Law stated – and Luke quotes it in our lesson – that the firstborn son is sacred to the Lord, consecrated to the Lord’s service.  However, the child could be “redeemed,” bought back, for five shekels, payable to any priest in the land.  St. Luke is vague about the details, but apparently rather than being redeemed and restored to his parents,  Mary and Joseph actually brought the child to Jerusalem and handed him over completely to God in the Temple.  The word we have translated here as “to present” is the normal word for “to offer” – the same word used to describe the offering of sacrifices in the Temple.

So, you see, in the Presentation, in the offering of the Infant Lord in the Temple, we see already the shadow of the cross falling across Jesus.  This is why he has come after all, Mary’s firstborn Son who is “the firstborn of all creation” as St. Paul describes him, to offer himself, to offer a perfect and pure life of love up to the Father on our behalf, as one of us, the right response to God’s act of love in creation. And our Lord’s faithfulness, his “obedience unto death, even death on the cross,” is rooted and grew to maturity in the context of family – in the careful, intentional, often no doubt inconvenient and difficult, but joyful faithfulness of Mary and Joseph. And then, what do you know, even from his cross, Jesus makes provision for his Blessed Mother, her own soul pierced with a sword of sorrow, placing her in the care of St. John. To his dying breath – and in his resurrected glory, as well – Jesus is a faithful family man. That is, Jesus the celibate man, is to his dying breath a family man, which is important for the single, divorced, widowed, as well as celibate priests and vowed religious to bear in mind.

I don’t think I need here to belabor the point of how important the family is – but precisely because the family is so important, so foundational for the raising of children in the nurture and admonition of the Lord, it therefore all the more important that we do not let it become an idol.  The family is a beautiful means to an even more wonderful end – a saving encounter with the Lord Jesus – it is not an end in itself.

Because family is hard.  It is difficult to maintain a marriage, to raise children as Christians in a culture that is seemingly everyday more hostile to and corrosive of the virtues and priorities of faith.  And when we allow family to become an idol, well, it just can’t bear the weight.  Children will disappoint, spouses will stumble, parents will fail.  I won’t even mention the scourge of siblings!  And if a shiny happy family is our ultimate end, our goal, our idol, then we won’t know what to do when the problems come, as they must.

Blessed John Paul II put it this way: “The Church is deeply convinced that only by acceptance of the Gospel are the hopes that man legitimately places in marriage and in the family capable of being fulfilled”.

And to “accept the Gospel” is to accept, and to embrace, and to cling to the truth that God in Christ has done for us what we cannot do for ourselves; that Christ is our righteousness; that we are the objects of God’s love and mercy and patience and forgiveness.  And having accepted the Gospel, the family is, again, “the first and ordinary” context in which we learn to extend that same love, mercy, patience, and forgiveness.  Which is to say, that it is the first and ordinary means, the first and ordinary location, of our daily conversion to Christ, so that the image and likeness of God, our true humanity, is restored in us.

In the Holy Family, in the Babe at its heart, we see that perfect image and likeness.  That family was not above the trials of normal family life.  Right from the beginning, like any parents, and each in her and his own way, Mary and Joseph had to make the decision to receive this child as a gift given and intended by God, with all the life-altering burdens that would normally entail, and the special burdens this particular child would entail.  Joseph in the dead of night leading his wife and child home and kin to Egypt.  The sword that would pierce Mary’s own heart, just as the prophetess Anna said, as she kept her station at her son and Lord’s cross.

But by their faithfulness, by the burdens they would carry, by the love they gave one another, this Babe grew, as St. Luke tells us, and became strong, filled with wisdom; and the favor of God was upon him so that, when his hour came, he would fully and perfectly present himself, offer himself up to his Father in heaven, and our salvation would be accomplished.  That’s what a family – faithful, joyful, holy – can be and do.

Jesus, Mary, and Joseph, save souls! And renew the Christian family!